“The farther one travels, the less one knows.” George Harrison, The Inner Light

Mixing has a lot of moving parts and can be a very intricate process that, no matter how much training you get, just flat out takes experience to get better at.  Experience just flat out takes time.  And the farther I travel down this road, I sometimes feel like there is more and more I do not understand.  This whole thing is not a matter of arriving anywhere, but rather, trying to do better all the time.  It can be frustrating, but also fulfilling.  Recently, I learned something new about drum mixing which is very satisfying. 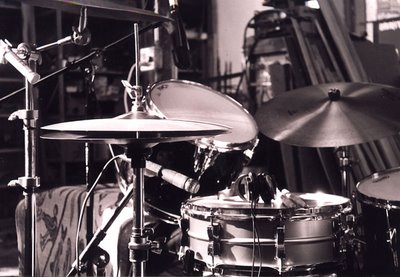 To break this down for the uninitiated, imagine a song with a full band.  You’ve got a singer and a backup singer doing harmonies.  You’ve got an electric guitar player, an acoustic guitar player, and a keyboard player.  Then finally we’ll wrap up our example band with a bass player and a drummer.  In this kind of setup, a mix engineer is probably wrangling a minimum 16 tracks of audio.  It’s probably more like 20-24 with multiple guitar parts, vocal takes, keys, etc.

So now you’re facing 20 or more individual tracks of audio with the goal being a 2-channel stereo mix that your wife will say. “I like that one” when you’re done.  It’s pretty normal to start your mixing process with a cup of coffee and a few episodes of House.  At least that’s how I start.  When that is done, solo the kick drum and begin.

The House That Drums Built

Why start with the drums?  Because in a song with drums, they are the foundation you are building your “house” on so-to-speak.  In beat-based music,  you need a solid foundation to insure that things don’t fall apart in the future.  If you can rely on your rhythm section later in the mix, you will save yourself a lot of time.  A typical mix will take anywhere from 8-12 hours to complete.  The first hour spent dialing in your drums can really make the difference between whether you’re going to spend 8 or 12.

The bottom line is that you really need to get the drums right, first.  The other stuff can be tweaked around with later, but if you mess up on the drums you may end up having to scrap a good bit of work down the road if you have not set up your foundation correctly.  If all you’ve got is time, this is not a big deal.  In a pro studio dialing in drum sounds can take the better part of a few days.  I have the luxury of knowing my equipment and room so I can dial a drum sound for a new project in a matter of hours, typically.  And for all the Destinysong stuff, we can move even faster if we don’t use a new kit, or change things up too much – sort of a power up and go situation.  But what happens when you’ve done all the right prep and later you still don’t like what you ended up with?  You can re-record everything, or you can use some pretty cool studio trickery formerly only available to big budget studios. 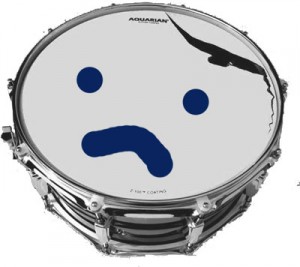 Drum replacement is the de-facto new norm in almost all music these days. I don’t do it and I’ll explain why in a sec.  For those of you who do not know what drum replacing is here’s a fly by: Let’s say you’re going to record a worship song that has drums on it. The drummer plays a 5-piece drum kit (kick, snare, 3 toms) with hi-hats (type of cymbals), 2 crash cymbals and a ride cymbal.  You use 9 mics on the whole kit to capture the drum performance as the drummer plays it.  The actual live drummer is recorded.  Later, when you are mixing the song, you realize that you don’t like the way the snare sounds as it was recorded.  I.e. in its original state, it doesn’t fit the song.  You have minimal options – one is to ask the drummer to come back in, set up the whole kit using a different snare, and re-record the song again.  But c’mon this is 2014!  Why take all that time?  There are a few ways to replace the snare on a recording, but it goes something like this: every time the drummer on your recording hits the snare, replace that sound with something else.  These days, super-sounds are available in downloadable sample libraries to anyone with a few bucks and an internet connection.  So why not use a snare recorded in a big studio in LA by a well known drummer on a very expensive kit using very expensive mics?  You bet, let’s do it.  There are several ways to skin this cat (sorry cat lovers) but basically, it’s a matter of triggering the super-sound whenever your newly minted lame-sound plays.

So now you have your drummer, on your song, playing what they played, but the snare is replaced with a new sound.  And man, check it out, the snare sounds uber-rad.  Hmm, now that’s we’ve done the snare, why not replace the toms?  The kick?  Heck, let’s replace the whole kit while we’re at it!  Sarcasm aside, would you be surprised to know that most of the drums on all the songs you listen to that were recorded in the last few years have no “real” drum performances to speak of on them?  Yes, a real live human being played the original part, but the sound you hear is all replaced drums (to say nothing of quantizing, stretching, snapping, etc. where you can actually move the drum performance around.  Is that kick drum a little behind the beat?  No problem, bam!  Just snap it to grid.  Yes this can be done.  I’ll save that for another day, if ever).  A typical scenario is to replace all the drums and keep only the overhead or cymbal mics from the live performance.

It begs the question – is drum replacement bad?  I don’t think it is.  Using technology to create art is fantastic and if the end result is what the artist (which anymore is as much the engineers and producers as it is the musicians) desires, then I say go for it.  I just don’t do it unless I have to.

A couple years ago I had original tracks sent to me for mixing an album – they were recorded in another state.  The kick drum was recorded so bad that I replaced it throughout the project.  It was a matter of necessity, so I did it.  Another time, I replaced the kick and snare on a pop tune I mixed since I wanted a very specific sound that we had not recorded and the drummer on the track was out of the country so I couldn’t exactly get him back in the studio easily.  Replacing the drums made sense there as well.  I’ve done other things as well up to and including the whole kit.

But that said, I don’t replace drums anywhere on about 99% of the music I record at Destinysong.  Why?  Because some of my favorite music, new and old, has real drums on it.  Plus I have a drum room in the studio and drum mics for the kit.  I always like a challenge and I figure, if I cannot get it right with that setup, why do I have a studio?  I could be recording drums in a closet and then just replace them all later.  Also, the onus is on the drummer to get it right in this scenario.  Young or inexperienced drummers don’t learn much in a studio when they know their drums will be replaced.  But if a drummer knows that their performance IS the track – well they have to learn good studio technique.

So more power to ya’ if you replace drums, I just don’t do it very much.

I’ve been happy with my drum mixing in the past.  But recently I read an interview with a top-name engineer who was talking about room mic(s) for the drums.  In it he said that he often dials in the room mic and from there adds in the other drums to compliment the room mic mix.  Huh.  Interesting.  This is specific to rock music, and most of what I do is in that vein.  I’ve read this advice before but over the past few years I have painted myself into a corner with the way I handle drums in a mix.  One thing I was regularly doing is chopping the legs out from under the room and overheads (I.e. eliminating the lower frequencies) thereby isolating the cymbals.  Then as I desired, I would add a little room width.  This is a totally acceptable technique (especially when replacing some or all of the drums).  But when I read this article I started to question how I was handling things and decided to go back to the drawing board.

Using a drum track recorded just a few days earlier I took everything off the channels (i.e. EQ, compression, etc.) and listened to the raw drums, as recorded, as played live.  Then I muted everything except the room mics.  I listened to that for awhile and realized I didn’t like the placement of those mics.  Funny how it comes down to the most basic of things sometimes.  Anyway, that notwithstanding, I got a pretty good mix using the room mics only and began to add in the other drums.  I used about 50% – 60% less processing on the drums than I normally do (i.e. less EQ, less compression, less reverb, less of everything including side-chaining techniques, etc.).  Once I had the drums sounding pretty good, which took maybe 30 minutes, I began to re-contruct the mix from there. 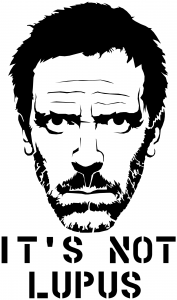 How does he always know?

Last night my son played me that track because he had added some other guitars and a vocal on it and posted the demo out to SoundCloud (an online service you can post music to and it can be replayed on any device accessing the internet - very handy since now we don’t have to burn dozens of CDs just to listen to demo mixes in the car, etc.).  We played the song on the TV sound system.  The drums were killing.  Really just killing.  It was such a good sound.

I was pretty stoked about this since my experiment was last week and I didn’t expect to be that impressed with the drum sound when I heard the tune on a pretty bad stereo system.  So I’m going to explore this whole technique more over the upcoming weeks.  I’m excited I learned something.  It only took me 5 years to get back to basics on this aspect of mixing, but I’m glad I am discovering new things.

And finally, just in case you don’t think recording is a highly complex and difficult task, here is some unhelpful advice from a popular forum for all things studio: “Contrary to popular belief there is no one correct way to record drums. In fact there are literally hundreds of ways to record a drum kit.”

Now I gotta go and fix the position of my overheads.  But first, I’ll put a pot of coffee on and fire up Netflix.