In n’ Out of Phase

I subscribe to a lot of recording newsletters, groups, etc. and recently an article came through my feed that led to a big change in our recordings.  It was titled something like “Recording Basics for Beginners.”  The title alone meant that just by clicking on it I might be confessing I was a noob.  I looked over my shoulder and feeling secure that I might not be caught loitering in noobville, I clicked through and began to read the article.  In it there was a little comment that has transformed a few things in the studio.  The blurb wasn’t much – it said something like “…assuming your mics are in phase of course.”  I had an ah-hah moment right there. You see, I like to set and forget.  And we set up the drum position and mics in the drum room a couple years ago and really have never changed anything since.  Mic choices and angles, pre-amp settings, EQ, compression, etc. everything is basically set the way we want it and we get a good sound.  But sometimes I’m missing that little special something and I am compensating in the mix more than I think I need to.  Before I go on, allow me to explain a phase issue as quickly as possible:

Imagine in your mind a sine wave, we’ll call it Sine Wave 1, and this wave represents an audio signal.  Let’s say it’s a guitar playing.  Now imagine a second sine wave, we’ll call it Sine Wave 2, that is the same audio recording of the guitar as the first signal, only it’s a little delayed (kind of like me being late for dinner – sorry Dina!).  Looky here:

See how Sine Wave 2 is occurring after Sine Wave 1?  To keep this discussion super-short, I’l cut to the chase.  In a recording studio there are many times that more than one microphone is used to record an audio source.  Take a look at the mics we set up on this guitar cabinet: 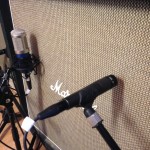 When the guitar player jams – we record the performance.  Each mic records the same thing, but if they are not placed exactly right, one signal will be slightly delayed, or behind the other.  A tiny bit of this is okay.  But any more than the tiniest bit (when I say tiny, I mean milliseconds) and problems arise.  If the delay is too great, the two signals are considered “out of phase.”

So What’s the Big Dealio?

If we play the recording back and the mics are out of phase, we not only cancel out some bottom-end (bass frequencies) but if they are terribly out of phase then we start to get some high end (trebly) flutter.  The worse it is, the worse the sound.  Things just sound bad.

In special circumstances phase can be our friend, but for my purposes here, we’ll assume that Mr. Out-of-phase is a bad guy.  And if you stack one Mr. bad guy on top of another, and another and another, well it just adds up to a whole gang of baddies that can adversely affect your final product.  Consider that on a typical recording session we use up to 10 mics on the drum kit simultaneously!

Epiphany can be defined as a manifestation of the divine.  I really feel that as we embark on this behemoth of a journey, God is watching over us.  In this case, a small comment in a rather uninteresting article lit the spark of an idea that translated into me re-checking phase in the studio.  Not only all over the drum kit, but in the amp room and more.  I had small phase issues all over that I was fixing in the mix!  You can imagine the thrill I had when a simple phase change brought out all sorts of beautiful frequencies in the drums!  Or how happy I am at how focused the guitar sounds when the mics are perfectly in phase.  I do believe that the Holy Spirit led me to that article, and that comment, and ultimately into the studio to fix this.  You may not believe God works like that, but I do, because it has happened so many times.

I’m so happy about this discovery and ultimate fix since it means our raw recording tracks are now more…pure.  The better the source material the better the outcome.  This will allow us to make better music for the glory of God.  And I think that matters.